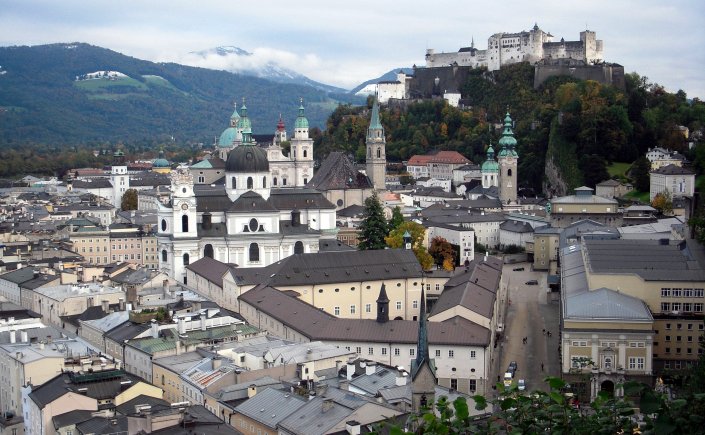 The last episode in the saga of my ‘European Rail Adventures’ led me to Salzburg, Austria, best known to some as the site of ‘The Sound of Music’. Although not done intentionally, I did not make an effort to visit any Sound of Music sights, or sing any Rodgers and Hammerstein songs. The history of the place, and the beauty of the landscape were enough for me. The first thing I did on arrival was find my hostel and check in. The view from the hostel was glorious! 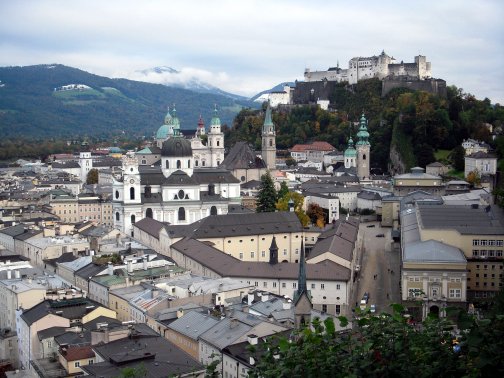 Room with a view – at the Stadtalm Hostel!

Some places just renew your faith that not all hostels are full of creepy people and indifferent proprietors. All the same, after this entire trip, I am wondering if I have perhaps outgrown hostels. But my budget will make that decision in future… as soon as I was checked in, I headed back down the hill in search of food and entertainment! Food came in the form of a hip little cafe full of Austrians near the Mirabell Palace. I had my first real conversation with a local seated at the next table over, who in his limited English told me he had been to Chicago and rode a Harley… and thought it was indeed a very windy city.

I had to cut out on the conversation early to make it to my last stop of the night: a live classical concert inside the Mirabell Palace. I barely made it before they shut the door to the small gilded hall where a pianist and violinist presented a few Baroque pieces (with the ubiquitous Mozart thrown in there) to a very appreciative audience. And all without being too touristy or pretentious. What better way to spend an evening in Salzburg? After the concert I stumbled back up the hill in the near-darkness to my hostel, and drifted off to sleep while gazing out the window at the city lights below. 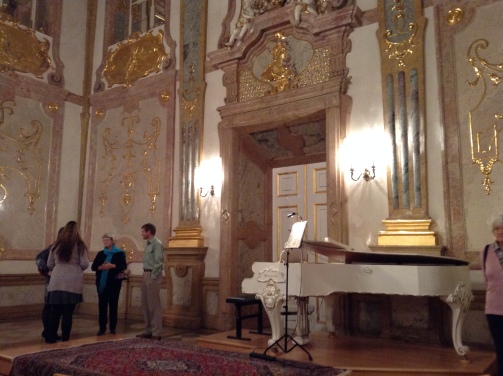 Attending a concert in the Mirabell Palace

With such limited time left on my trip, I had big plans for my one full day in Salzburg. I already know that I could easily have allowed myself more time in this historic city. And can I just say how cool it is that I could wander around listening to a Rick Steves walking tour on my ipad, and stop to take pictures on the ipad, and then skype my Dad at work?! I used the audio tour as the form for my day, and made prolonged stops at places that interested me. For instance, the Salzburg Museum for a look at the city’s history and an interesting take on the Salzburg landscape in Romanticism…

After my morning spent in the museum, I again got sidetracked (this time by something a little less cerebral) when I discovered a festival outside the Cathedral, and thought it would be a perfect spot to stop for lunch. It claimed to be an ‘eco festival’, but it was really a festival with barely a few eco-friendly vendors thrown in. I spotted one of the food vendors with the longest line and judged this must be the best food in the place, though I don’t even know what it was: a fried dough frisbee with sauerkraut? 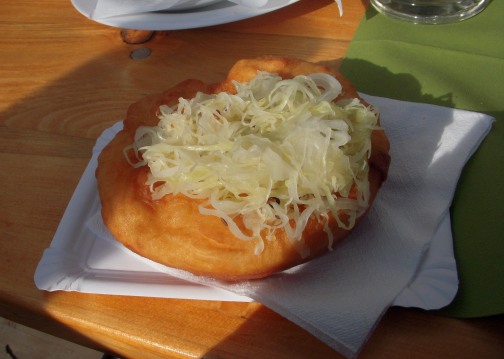 To go with my lunch I ordered a half liter of the local brew! The older couple sharing my bench in the tent seemed to think it was a lot of beer for such a little lady. The beer did embolden me to try out a sentence in German, and they kindly agreed to take my picture, whether or not they understood me. I did in fact finish my glass, and listened to some funky live music before moving on. 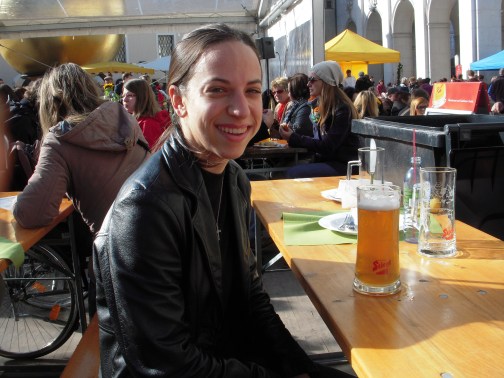 Chilling at the outdoor festival with a stein of Stiegl

Last order of the day was to burn some calories and check out the hilltop fortress overlooking Salzburg. Again, I walked up, but passed on paying to go inside the actual fortress, and walked along the hill instead. It was not too cloudy and I was blessed with these spectacular views south into the mountains, and looking up at the fortress. My little hike eventually led me back down to town, and to the train station where I caught my last overnight train towards a flight home out of Frankfurt, Germany. Another whirlwind visit, and another beautiful city explored. 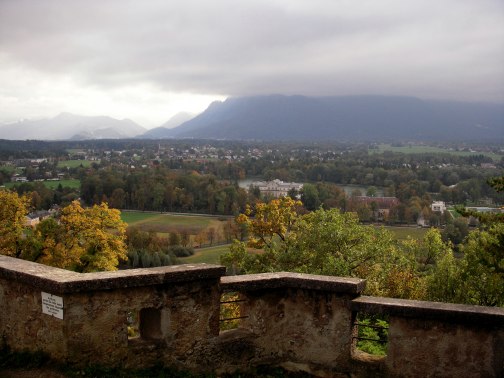 The view south along the Monchsberg 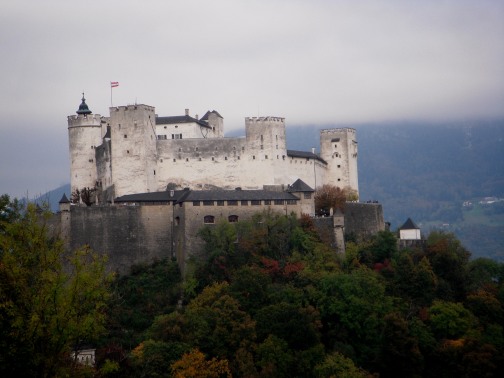 Hohensalzburg Fortress in the clouds