As the reverend concluded his echoing prayer of blessing for the Duke and Duchess on their one year wedding anniversary, I was looking at a stone with Charles Dickens’ name on it, and reminiscing about my time there two years earlier. It has been over two years since I visited London, the first time being an unplanned week-long stay, thanks to an Icelandic volcanic eruption ( I blogged about it). I had been on my way home from a solo vacation only to find myself stranded alone without a clue. I spent much of the week with a CouchSurfer, borrowing his bike and seeing all the free museums and parks I could manage to get to. I remember sitting outside Westminster Abbey on a quiet evening, but this time I was enjoying the evensong service inside!

I had no idea two years ago that I would be living and studying in Leicester, UK this year. But a year later I remember waking in the early hours to watch the Royal Wedding, since by that time I had made the decision to get my Masters degree abroad. I made the first journey to Leicester in late September last year, but never went to London, as I was saving the visit for my parent’s arrival. This April we spent five lovely days in London, and I got to visit old and new places, playing the role of tour guide for my parents. And each time we stumbled upon someplace familiar, my memories came wandering in. It was a surreal experience.

The first moment happened the day we arrived. My mother had been dying to see the British Museum so we went there first. It was a busy Friday afternoon, and we could barely elbow our way in to see the famous Rosetta Stone, but my memory was of standing squarely in front of the piece with only a few people milling about around me. Many of my memories are rather serene like this, as if I were wandering around London in a daze, and no one intruded on my little bubble. In fact, I had been wandering around in a daze, anxiously wondering how long I might be stranded, and only half of my brain seeming to be functioning. This time I came fully prepared, highlighting passages in my guidebook, and setting an energetic pace!

Another surreal moment came when I suggested we visit the Museum of London (of course another museum). I had heard they were having a special exhibition on Charles Dickens and his muse that was London, in celebration of 200 years since his birth. When we arrived, I realized I had been here before! In my stranded-traveller daze, I had come here having heard that it was free, but only seeing a third of the place, and leaving slightly disappointed. I am happy to say that my estimation has much improved, and by the way I loved the Dickens exhibit! Near to the museum was another landmark that brought back memories: St Paul’s Cathedral. As we walked around the outside of the cathedral, I remembered having rode that fold-up bike here all the way from Notting Hill. The madness of biking around downtown London traffic does not now escape me.

As my parents and I explored more and more of London by tube, I realized just how far I had travelled on my little bike two years ago. I had gone around Hyde Park, up to Regent’s Park, all over the City, and down into Southwark. I even recall biking past Harrod’s and wondering what was so special about it; I didn’t bother going inside. This time I am glad we decided to check it out, as it rivals even my beloved Marshall Field’s (Macy’s) in Chicago. Unfortunately, the reason I have memories of biking all over London is because I do not recall it raining once while I was there. I am told that was massively unusual and will never happen again! Our recent weather was much more typically British – lots of rain, and broken umbrellas strewn everywhere.

Of course, despite the rain it was a wonderful visit for us, and a very reminiscent one for me. My largely aimless wanderings by bike had given me a far better grasp of London than I had imagined, and evenings spent in a small Notting Hill flat were calm. Now I have been able to put names to all the places I had unknowingly visited (Museum of London, Trafalgar Square, Speaker’s Corner), as well as add a few wonderful places to my list (Greenwich, Churchill Museum and Cabinet War Rooms, Theatre district). Without romanticizing too much, I felt as though my unexpected time in London two years ago had set in motion the chain of events that has brought me to the UK this year, and eventually back to London again. I hope to have more such travels in the future. 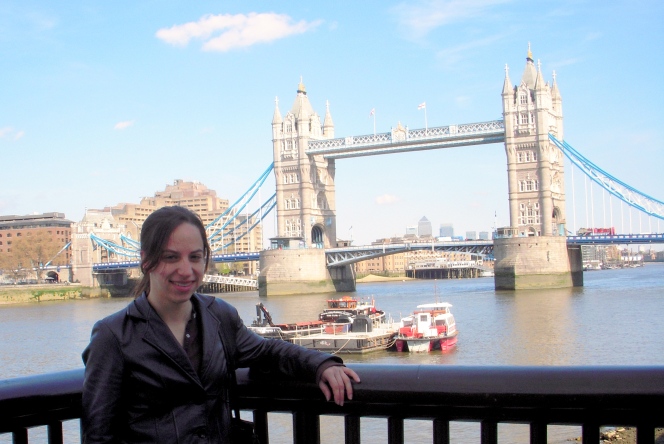 April 2010 – myself at Tower Bridge in sunny London 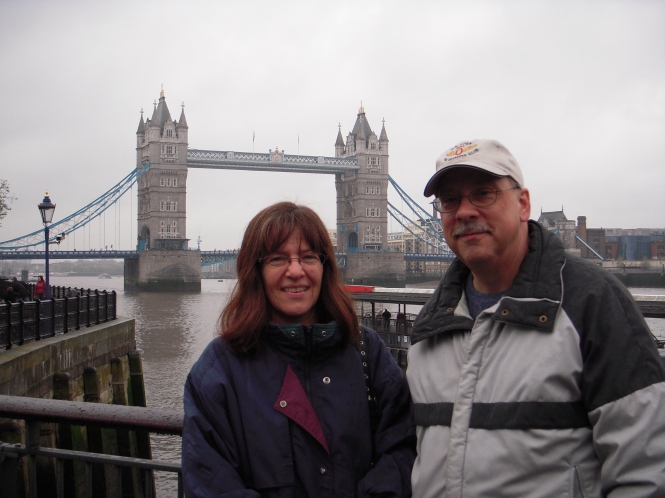 April 2012 – my parents at Tower Bridge in rainy London